Veganism is becoming increasingly popular, as it is estimated that between 1-2 per cent of the UK population are now vegan. Others have become dairy-free, take on veganuary, or are making small lifestyle changes to better their health and to be more sustainable.

For those who are new to a plant-based lifestyle, there are plenty of healthy, non-dairy alternatives to cow’s milk out there. Soy milk, almond milk, and coconut milk are all common choices, but oat milk seems to be taking over the dairy-free world at the moment.

Even some Starbucks stores in the US are struggling with the demand- as many of its stores face a shortage of oat milk only a month after introducing it to the brand.

The only issue with oat milk seems to be that it curdles… but our HumaniTea Vegan Oat Milk Tea Lattes are perfectly blended so that it won’t curdle, and you can enjoy a smooth, refreshing drink!

What are the benefits of oat milk?

It is allergen friendly

Oat Milk is not made from any dairy products and it is purely made from oat grains and water, giving it a naturally sweet and creamy taste. It does not contain lactose, nuts or soy, but do check that the oats are free of gluten so that it is safe for those with Celiac disease.

It is good for your health

It is high in nutritional content as it includes fibre, protein, minerals and vitamins A, B2, B12 and D, which makes oat milk great for daily consumption. The amount of calcium present in oat milk also helps strengthen bones and reduces the risk of osteoporosis.

All of the nutrients come from plants, making it healthier than cow’s milk. It is low in fat and contains zero saturated fats which helps with digestion, the immune system and gut health, and weight management.

It is great for the planet

Oat milk is one of the most sustainable vegan milks out there. They use less water produce than other milks, and they use less greenhouse gas emissions compared with soy and cow’s milk. Not to mention 80 per cent less land is used to grow oats than dairy milk.

What do vegans think of oat milk?

Long term vegan Emily says oat milk is her drink of choice as she consumes it every day: “It’s the most compatible with everything from cereal to teas and coffees, and just on its own as the taste and flavour isn’t overpowering like almond or coconut milk.

“I don’t like nuts either so that’s a factor… but I think it’s mainly due to the flavour being really nice, and it can be made to be quite subtle.”

Dana, who has recently found out she is lactose intolerant, says that oat milk is the best dairy-free alternative due to its taste and texture:

“The only thing I missed when I went dairy free was milk as I drink around five cups of tea a day. I was drinking soya milk for a while but I was never fully keen on the taste.

A friend recommended oat milk and now I use it in my tea, and for my cereal. It is thicker, creamier, and sweet and now I don’t have the crippling stomach pains I had with dairy.”

Why do HumaniTea use oat milk in their lattes? 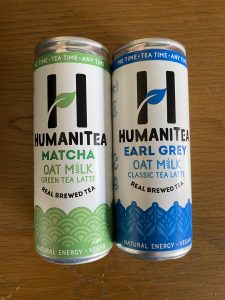 Chief Tea Officer Tina wanted to create a beverage that was suitable for everyone, including vegans and those who are lactose intolerant. Oat milk is also one of the most sustainable and eco-friendly milks due to emissions and water usage.

Its creamy texture and sweet taste is also perfect for chilled tea lattes such as our Earl Grey and Matcha flavours! The oat milk, tea leaves, and other ethically sourced ingredients are brewed together so that the milk doesn’t curdle, and it is all low in sugar- making it healthy as well as vegan.