The last Friday in June is National Cream Tea Day! It originates from Devon in the South West of England and has become a tradition in Britain, and other countries around the world.

A traditional cream tea consists of tea, scones, clotted cream, jam, cakes, sandwiches, and other finger food. Of course, you can find vegan alternatives to these and not miss out on such a delicious treat!

It is rumoured that cream tea was invented as long ago as the 11th century when vikings and monks were in Devon and they shared scones, clotted cream, and jam- but London’s first tea room wasn’t open until 1706 when Thomas Twining set one up. 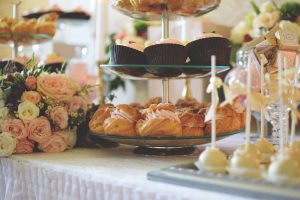 Yet the first mention of an “afternoon tea” may have come from Anna, the Seventh Duchess of Bedford in 1840. She wanted some food between lunch and her evening dinner, so would often have tea, with bread and butter, but over time this became a lot more sophisticated and even more delicious.

The concept of National Cream Tea Day was invented by The Cream Tea Society and is organised by Rodda’s Cornish Clotted Cream and Wilkin and Sons Tiptree. It is now celebrating its seventh year and for the second year running, they have had to host the occasion online.

They have raised nearly £700,000 for various charities across the UK, and you can find out more about the events here.

What has HumaniTea done for the occasion? 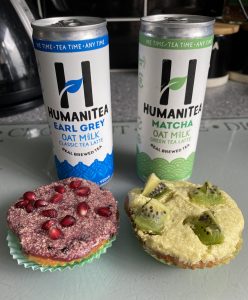 A staple of cream tea, cupcakes are easy and fairly quick to make- and you can customise your ingredients to suit you.

Below we have written down the recipes for our vegan cupcakes. One batch includes our Earl Grey Oat Milk Classic Tea Latte with blackberries and pomegranate, and the other batch uses our Matcha Oat Milk Green Tea Latte with avocado and kiwi.

You can view our TikTok page that shows the Earl Grey and Matcha recipe. 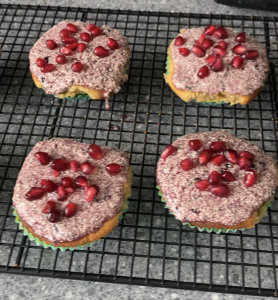 Step 2- Measure out 110g of self-raising flour, 100g caster sugar and ½ tbsp of baking powder, and add to a big bowl. Mix this together and leave a dip in the mixture.

Step 3- Measure out 90g of vegan butter, 100ml of HumaniTea Earl Grey and ½ tbsp of vanilla extract. Add this to the dip in the mixture and whisk until combined and smooth, then spoon this mixture into the cupcake cases.

Step 4- Bake in the oven for 20 minutes until risen and golden brown, then put the cakes on a wire rack to cool for a while.

Step 5- For the icing, measure out 150g icing sugar and 75g of vegan butter. Add to a bowl and start to mix slowly.

Step 6- To the same mixture, add a splash of HumaniTea Earl Grey and a handful of blackberries.

Step 7- One completely mixed, spoon or pipe the icing onto the cupcakes, and add some pomegranate for decoration. Put them in the fridge for the icing to set, then enjoy! 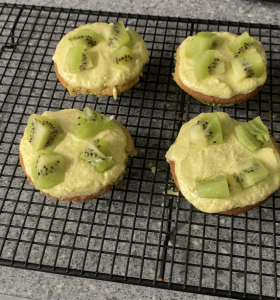 Follow the exact method as the previous recipe, but for step 2, you need to use our Matcha Oat Milk Green Tea Latte instead of the Earl Grey flavour.

Also for step 6, you should add a splash of Matcha and a spoonful of avocado, and replace the pomegranate topping with kiwis.

What can you do for National Cream Tea Day?

Now that restrictions are easing, there will be some tea rooms that are open for business! Go and visit for a great day of cream tea, cakes, sandwiches, and more.

Or if you fancy staying in, take part by yourself at home or get some friends round to celebrate this glorious British tradition. Make your own food and enjoy the day. If you want to post on social media, use the hashtag #NationalCreamTeaDay and join the fun!